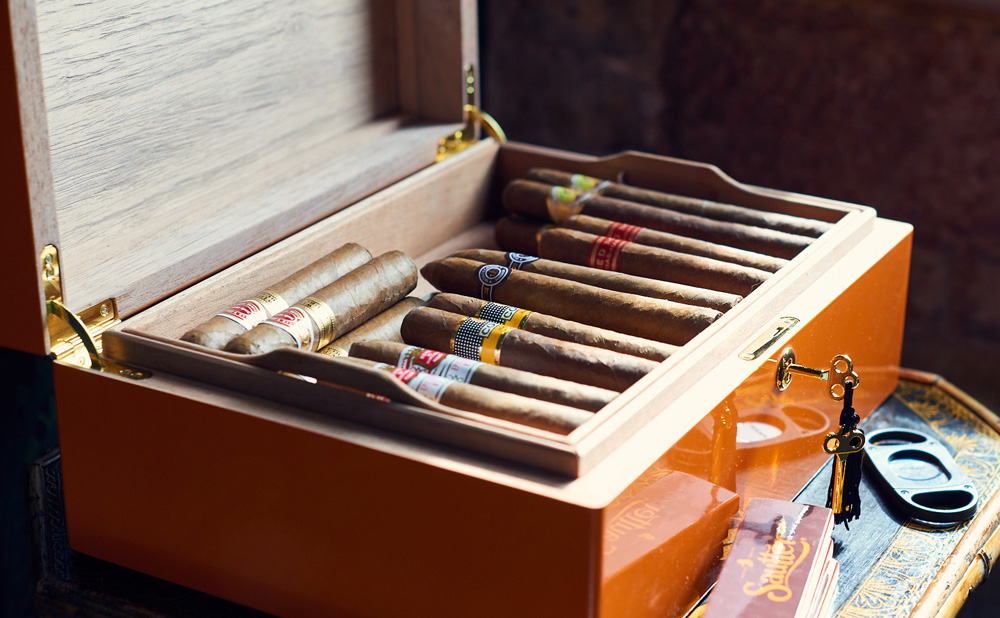 Have you ever experimented with laying down cigars?

It’s accepted practice when it comes to wine – and indeed vintage cigars have a certain cachè as well as as an increase in later sale price if they’ve been kept well – but it is by no means an exact science, and most cigar smokers can only define it in broad terms.

The conventional opinion is that slow ageing in suitable conditions allows all the flavours trapped within the cigar to come to the fore; for them to marry and blend as the creator originally intended; and to form something wholly unique and different to the taste and flavour profile of the cigar when it was first rolled.

This is exciting to the cigar lover. It adds a new dimension to an already rewarding and enticing hobby. It gives him or her a whole new gamut of ideas, flavours and situations to play with.

Let’s take an old favourite, like the Hoyo de Monterrey Epicure No.2. It’s a classic of its genre, always presentable, always reliable, a nuanced and delicate cigar that has stood the test of time and trend and which features on the cigar rotation roll of many a knowledgeable enthusiast.

At three years, it’s sublime and as good a companion to a Summer’s afternoon as any you could care to mention. But what happens when you’ve aged it for ten years, or even five? That is an open-ended question, for it depends where and how you’ve stored it and at what temperature and relative humidity levels. But it’s fair to say that, if well kept, it’s certainly a different cigar, and that’s what’s attractive. The cigar takes on hints that you didn’t know were there at earlier smoking; and maybe some notes that were noticeable have dropped away.

The general consensus is that ageing on the whole refines a cigar; takes the rough edges off it and turns it into a more smooth, subtle version of its former self. It’s generally agreed that powerful, flavourful cigars age better than lighter ones. That’s one of the reasons the Partagas’ and Cohiba’s of the cigar world remain so popular. The brighter the cigar is at birth, the more potential it has to develop.

However, this is by no means a hard and fast rule, and like all the most intriguing things in life, the rule is there to be broken. The Epi 2 is a good example. It’s regarded as a light-bodied cigar from the get-go and therefore perhaps not a prime candidate for ageing. Yet we’ve tasted decade or more old versions that have been sensational – and now we’re digging around in the vaults to see if we can find some even older expressions to test further. Perhaps we’ll put up a video review of our findings.

Many of us won’t have the time, available funds or patience to lay cigars down for ten-year stretches, but we can begin the process and watch it at work. Try buying cigars with older box dates (not as easy as it once was, with current stock being rolled and out of the the doors in Cuba in vast numbers these days) but you can still pick up a box from a year or two back if you dig around. Hide it away in your humidor. And visit it once a year, or every six months if you must. You’ll see the development curve, when it begins to soar to new plains, when it plateaus and if you keep it long enough, when it feels like it’s gone past its best (this can be a very long time indeed. We’ve smoked cigars in excess of 50 years old that were still amazing!)

But treat it as another wonderful sidebar to the cigar hobby you already enjoy. And ask at Sautter for something a little vintage. We always have some good stuff stashed for you, even to try by the stick.

We do the hard yards by squirelling away old cigars so that you get to enjoy them sooner. And don’t worry what they look like. They may have lost their oily allure, but what lies inside may be a new revelation to you. Don’t forget – age comes before beauty.