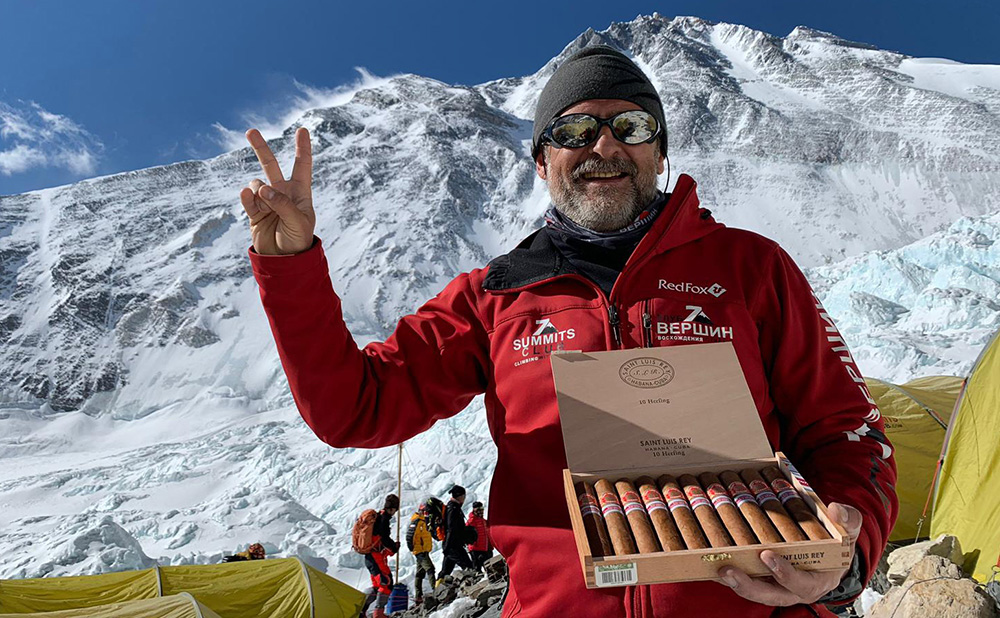 So, a cigar has been carried to (if not smoked at) the top of the world. Some stunt.

Ukrainian-Cypriot Yevgen Staroselskiy – in conjunction with Phoenicia Trading AA, Habanos importers for the Middle East – toted a box of Saint Luis Rey Herfing Exclusivo Medio Oriente right to the top of Mount Everest and was pictured proudly displaying the Duke sized cigars on the roof of the world. Apparently, the cigars will later be auctioned in Lebanon.

Bizarre publicity stunt for sure, but it did get us wondering of all the daft places we’ve enjoyed cigars over the years. What are yours?

Nick Hammond’s latest book – Around The World In 80 Cigars – The Travels Of An Epicure – which launches in September and is available to pre-order now, tells of a lifetime of smokes in strange, luxurious, far-off places. You can hear Nick and El Jeffe Laurence Davis chat about the book – and another they’re working on – in their latest video.

From a minefield in war-torn Bosnia to the rain forests of Borneo; from Great White Shark-infested waters off South Africa to the Japanese Alps; from the foaming shores of Miami to the crashing Atlantic waves off the Scottish highlands; Nick has a host of memorable tales to recount, all of which are linked by his love of a fine, handrolled cigar.

We’re hoping to persuade him to perhaps conduct a reading of a chapter or two for a future video to give you a sneak preview of Around The World In 80 Cigars. In the meantime, perhaps you’d like to let us know about some of the weird and wonderful places you’ve enjoyed a smoke; are you a ship’s Captain who lights a stogie in exotic waters on a regular basis? Perhaps you’re a skier who likes nothing more than a glass of something refreshing and a cultured cigar after a morning on the slopes. Let us know some of the strangest and most exotic places you’ve enjoyed a cigar and we’ll publish the best of them on social media.

Life on the road for your cigars can be tough – just as it’s sometimes hard on your body to change routines, climates and time zones, the same applies to your humble cigar. Make sure you invest in keeping it healthy so that when that precious right moment comes, you’ll be able to enjoy a first-class smoke.

One of these little beauties is virtually essential, we would humbly opine; an airtight, indestructible container that will allow you to transport your chosen cigars in style. Just add a Boveda sachet to maintain humidity (you can buy these over any Sautter counter) and you’re good to go.